Most people think of snoring as nothing more than a nuisance to roommates or bed partners. Loud and persistent snoring, however, can signal a serious health problem. Snoring occurs when the soft tissue structures of the upper airway collapse onto themselves and vibrate against each other as we attempt to move air through them. This produces the sound we know as snoring. Large tonsils, a long soft palate, a large tongue, the uvula, and excess fat deposits in the throat all contribute to airway narrowing and snoring. Usually, the more narrow the airway space, the louder or more habitual the snoring.

Snoring could be a symptom of Sleep Disordered Breathing.

The term Sleep Disordered Breathing describes a range of sleep breathing disorders that include: snoring, upper airway resistance syndrome and obstructive sleep apnea. Sleep Disordered Breathing is a continuum of these conditions. Simple snoring represents the mildest disorder that is noticed when breathing during sleep is very loud due to the near collapse of the upper airway. When the snoring becomes worse, due to further airway collapse, more effort is required for breathing and sleep becomes interrupted. This condition is referred to as upper airway resistance syndrome. The most dangerous problem in the continuum is sleep apnea. Sleep apnea describes the condition when oxygen levels in the blood drop as a result of the complete collapse of the airway. During an apnea, breathing cannot occur, and the sleeper is forced to awaken to resume normal breathing.

Obstructive Sleep Apnea occurs when the tongue and soft palate collapse onto the back of the throat. This blocks the upper airway, causing air flow to stop, which in turn causes the blood oxygen level to drop. When the blood oxygen levels drop low enough, the brain moves out of deep sleep and the individual partially awakens (an arousal). The airway finally reopens, usually with a loud gasp. The individual then moves back towards deep sleep until the next apnea occurs. This cycle of events may occur many times during the night, sometimes once per minute.

The combination of low oxygen levels and fragmented sleep are the major contributors to most of the ill effects that the sleep apnea patient suffers. In addition to excessive daytime sleepiness, studies show that sleep apnea patients are much more likely to suffer from heart problems (heart attack, congestive heart failure, hypertension, high blood pressure), strokes, metabolic syndrome, weight gain, diabetes, mood swings, acid reflux, and sexual dysfunction as well as having a higher incidence of work related and driving related accidents. The diagnosis of sleep apnea is graded mild, moderate, or severe.

The term ‘upper airway resistance syndrome’ denotes an entity characterized by the presence of daytime fatigue or sleepiness in the presence of a normal respiratory disturbance index and oxygen saturation. Despite some similarities, certain specific clinical and diagnostic features distinguish it from the obstructive sleep apnea syndrome. The essence of diagnosis lies in the documentation of increasing esophageal pressures during sleep with associated transient EEG arousals. Furthermore, the evidence suggests an abnormal blood pressure response to the changes in esophageal pressures and arousals.

GERD is a disease that refers to the clinical manifestations of reflux (backflow) of stomach contents into the esophagus. It is the most common disease of the esophagus, affecting up to 40% of adults. Typical symptoms of GERD include heartburn, abdominal discomfort, difficulty swallowing, and acid regurgitation. This acid irritates the esophagus because it doesn’t have a special lining to protect it like the stomach does.

GERD that occurs at night is called nocturnal GERD. Although reflux episodes occur less frequently at night than during the day, the esophagus lining is exposed to the stomach’s corrosive contents much longer at night. When you lie in bed, the protective effect of gravity is lessened. Researchers also believe that apnea episodes may cause a negative pressure in the esophagus which will then work like a vacuum to bring the acid up from the stomach. Complications of nocturnal GERD include erosive esophagitis and the precancerous condition Barrett’s esophagus, as well as esophageal cancer. Sometimes the acid comes all the way up into the mouth where it can cause damage to the teeth. Your dentist should look for this during periodic exams.

Many people who have been successfully treated for apnea have experienced a reduction in GERD symptoms.

What does a home sleep study involve?

Many people don’t get good quality sleep, and they don’t know why. In the past, you would need to go into a lab for a sleep study, but now you can get this valuable information from the comfort of your own home. A home sleep study involves a monitor that tracks your breathing while you’re asleep to determine if there are any interruptions. Once you know what the issue is, it can be addressed.

What is obstructive sleep apnea?

Obstructive sleep apnea is a sleep breathing disorder that occurs when the tongue and soft palate collapse onto the back of the throat, blocking the airway and causing airflow to stop. When proper airflow is hindered, blood oxygen levels drop, which can cause one to partially wake from sleep. As such, the condition causes fragmented sleep and can lead to a range of issues, including daytime sleepiness, as well as an increased risk of severe health problems like heart attack, stroke, weight gain, diabetes, mood problems, depression, and sexual dysfunction.

There are a number of risk factors that can contribute to the development of obstructive sleep apnea. These include weight gain, snoring, aging, having a family history of the condition, and malformation of the orofacial area (such as misaligned teeth, jaw, and palate). Teeth grinding (also known as bruxism) can also lead to obstructive sleep apnea, while menopause, polycystic ovarian syndrome and a deficiency of progesterone or estrogen can also be risk factors. The anatomy and physiology of the airway play an important role, and those with a small jaw or thick neck are generally at greater risk of developing the disorder. 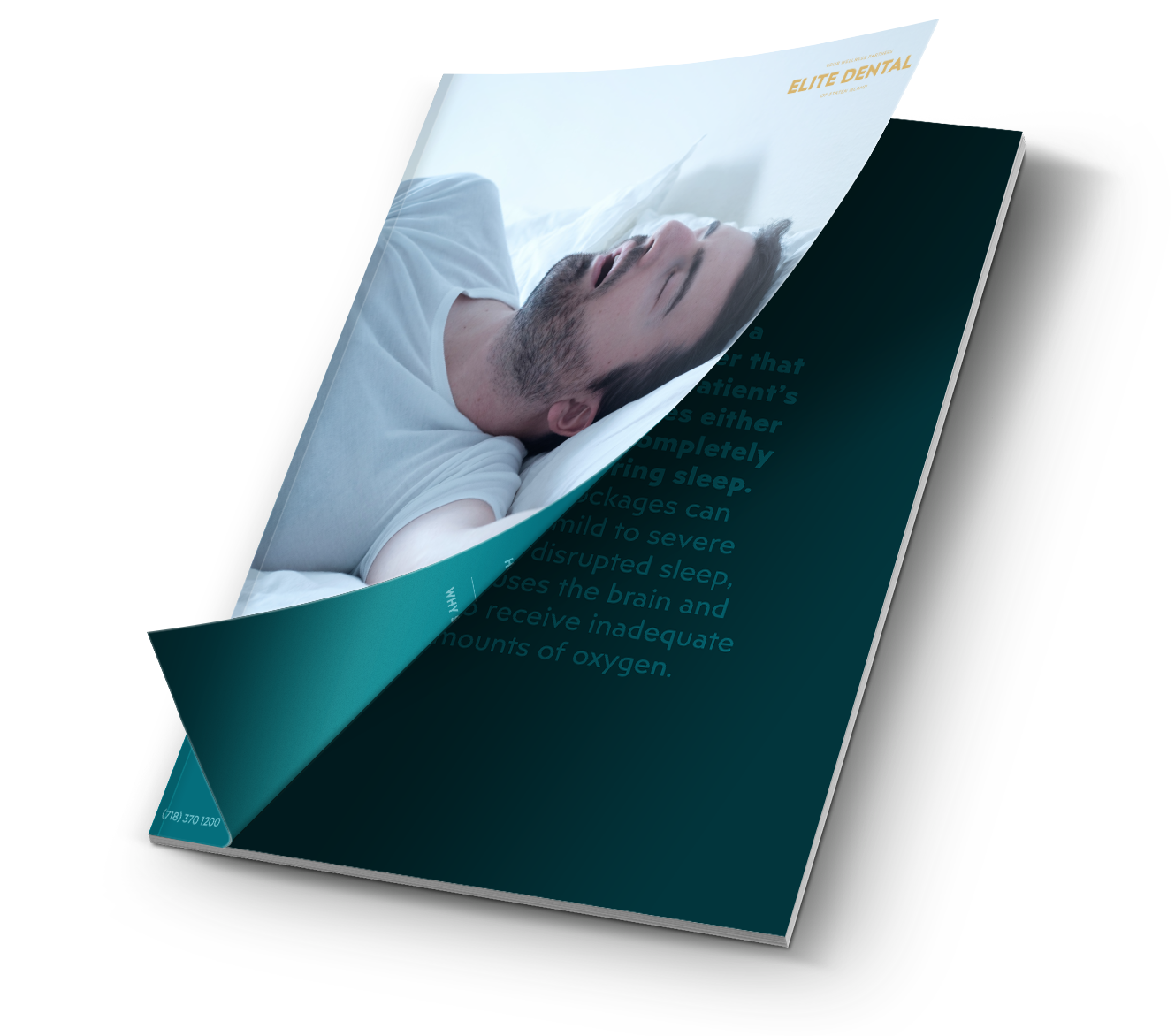 DR. STEVE ACKER AND THE FRIENDLY TEAM AT ELITE DENTAL OF STATEN ISLAND LOOK FORWARD TO MEETING YOU IN THE PRACTICE SOON.

Monday
9.00am to 5.00pm
Tuesday
12.00pm to 8.00pm
Wednesday
9.00am to 5.00pm
Thursday
12.00pm to 8.00pm
Friday
CLOSED
Learn More!
×
In honor of Children's Dental Health Month, we're hosting an exciting event about myofunctional therapy, and how your child's breathing could affect their health for the rest of their life. This event will take place at our office on Monday February 26 from 4.30pm
×
Secure Your Seats
Find Out More
Thanks to environmental changes, children are now being born, and growing up to adulthood with malformed airways and jaws.

×
Get more information about myofunctional therapy
for your child
Find Out More
Learn how you can help your child!
×
Check your inbox for an email from us!
Thanks to environmental changes, children are now being born, and growing up to adulthood with malformed airways and jaws.

×
Get more information about myofunctional therapy
for your child
Find Out More
Learn how you can help your child!
×
Check your inbox for an email from us!